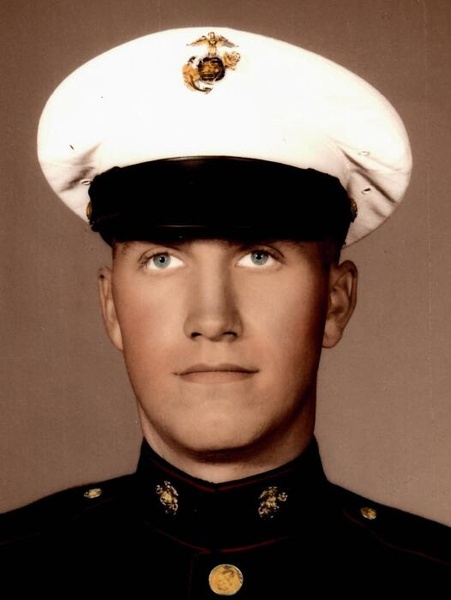 William was born on May 24, 1946 in Evergreen Park, IL, the son of Edward and Josephine (Gembala) Gribac.  He served as a Sergeant in the United States Marine Corp during the Vietnam War.  After his military service, he worked as a lithographer and manager at Bennett Industries in Peotone.  He then worked at the Manteno and Peotone United States Post Offices as the custodian retiring in March, 2020.  He was an active member of Peoples Church in Bourbonnais, IL and a lifetime member of the Peotone American Legion Post 392.  He enjoyed traveling and spending time with his family, friends, and two pugs, Honey and Twinkie.

He is survived by his wife, Carol (Pozdoll) Gribac, who he married on July 5, 1986 in Palos Park, IL.  He is also survived by his children; Anthony (Kimberlee) Gribac of Allen, TX, Chad (Tammy) Gallagher of Chicago, IL, Casey Gallagher of Chicago, IL, and Kyle (Alexandria) Pozdoll of San Antonio, TX; his grandchildren, Madison, Dawson, Peyton, and Hope Gribac, and Isaiah and Elise Pozdoll; a brother, Edward (Maryann) Gribac of Creal Springs, IL; a sister, Bernadette Geraci of Tinley Park, IL; and numerous nieces and nephews.  He was preceded in death by his parents.

Visitation will be held at the Peoples Church, 6644 North 1000 W Rd, Bourbonnais, IL 60914 on Friday, July 17 from 9:30 a.m.-11:00 a.m. with a funeral service beginning at 11:00 a.m., Pastor Greg Eilders officiating.  For the safety of the family, a face mask will be required to attend the visitation.  Private interment will take place at Abraham Lincoln National Cemetery in Elwood, IL at a later date.  Memorials to the Gift of God Street Church, 660 N. 5th Ave, Kankakee, IL 60901 would be appreciated.

To send flowers to the family in memory of William Gribac, please visit our flower store.