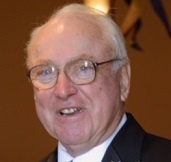 William B. Barton, age 88, of Poway, CA, formerly of Peotone, passed away Tuesday, February 3, 2015 at Pomerado Hospital in Poway, CA.

He was born on January 22, 1927 in Peotone, IL, the son of the late Stacey B. and Elsie E. (Jurres) Barton. He married the late Rosemary L. (Jones) Barton on October 30, 1954 in Kankakee, IL. She preceded him in death on November 2, 2014. Bill was a stock broker who loved following and analyzing the stock market. He was a very social, quick witted, funny man. He was a member of a number of different social groups including golf leagues and a wine tasting group. He loved being with his family and friends, playing golf, and traveling all over the world with his wife and children. He especially loved his grandchildren and spoiling them, often sneaking them chocolate and Dr. Pepper. He was a master gardener who was known for his tremendous rose bushes. He would have his grandchildren help him in the garden where he let them get filthy digging in the dirt and watering the plants with him. He was an avid Chicago Cubs fan, but also enjoyed all other sorts of sports. He was a World War II Army Veteran drafted into the service right out of high school. He was a member of the Peotone American Legion Post 392 and a longtime former member of the First Presbyterian Church of Peotone.

He is survived by his two children; Lisa Barton (Dan) Fitzpatrick of Reno, NV and Danny (Brandy) Ronek of Imperial, CA; and seven grandchildren, Aisling and Keara Fitzpatrick and Chloe, Emma, Allison, Brandan, and Mylee Ronek.

Visitation will be held at the Fedde-Helfrich-Cross Funeral Home on Thursday, February 12 from 4:00-8:00 p.m. Funeral services will be held at the First Presbyterian Church of Peotone on Friday, February 13 at 11:00 a.m., Rev. Jonathan Krogh officiating. There will be visitation at the church from 10:00 a.m. until the time of service. Interment will be at Peotone Cemetery.

To send flowers to the family in memory of William Barton, please visit our flower store.