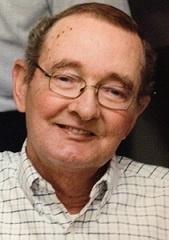 He is survived by his wife, Sandra (Yunker) Teske of Peotone who he married on June 29, 1963 at St. John’s United Church of Christ in Mokena. He is also survived by 5 children; Shirley (Robert) Vercruysse of Manteno, Michael (Olga) Teske of Peotone, Brenda Teske of Peotone, Kim Teske of Peotone, and Amanda (Ben) Brooks of Yorkville; 8 grandchildren, Lee Simonek III, Nicholas (Genie) Simonek, Tiffany Teske, Emily (Brice) Peters, Annie Vercruysse, Alex Teske, Sophia Brooks, and Michael Teske Jr,; 2 great-grandchildren, Madelyn and William Simonek; and 3 sisters, Violet Funk of Mokena, Shirley (John) Delladio of Mokena, and Carol (Ken) Jacobs of Manhattan. He was preceded in death by his parents; a son, Eric Teske; a brother and sister-in-law, Robert (Lynne) Teske, and a brother-in-law, John Funk.

He was a maintenance supervisor for Mobil Chemical in Frankfort retiring in 1992. He was a member of Faith Community Church in Peotone. He was a former member of the St. John’s Cemetery Board and St. John’s United Church of Christ of Peotone Church Board where he was also formerly president. He enjoyed gardening and working in his yard. He worked with Peotone Township and several other townships in the years since his retirement. He also volunteered with Helping Hands of Peotone.

Visitation will be held at the Fedde-Helfrich-Cross Funeral Home on Thursday, November 20 from 3:00-8:00 p.m. Funeral services will be held at on Friday, November 21 at 11:00 a.m. at Peace Community Church, 21300 S. LaGrange Rd., Frankfort, IL. There will be visitation at the chrch from 10:00-11:00 a.m. prior to service. Pastor Zach Grell and Pastor Dave Marsett will officiate. Interment will be at St. John’s Cemetery, North Peotone. Memorials to the Family’s Wishes would be appreciated.

To send flowers to the family in memory of Wilbur Teske, please visit our flower store.