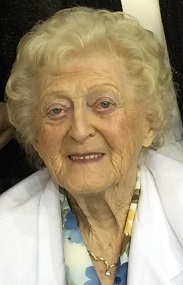 She was born on December 21, 1918 in Monee, the daughter of the late George and Emma (Bauer) Seggebruch. She married the late Edward G. Vehrs on February 17, 1946 in Monee. He died July 27, 2003. She was a homemaker, a member of St. Paul’s United Church of Christ in Monee, and a former member of the American Legion Auxiliary.

To send flowers to the family in memory of Verna Vehrs, please visit our flower store.