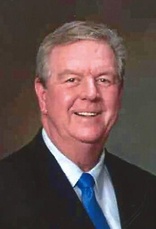 Thaddeus "Ted" Vincent Regan, 59, of Peotone, IL, passed away July 01, 2014 after a valiant fight with colon cancer. Ted was born in Peotone, IL on October 2, 1954 to the late William and Leenora Regan (nee Davis). Ted wore many hats throughout his life and had an entrepreneurial heart for business. He had his own fuel company and for 23 years with Thrivent Financial he pursued his passion for helping others with their finances. He was an example for others on how to be an excellent grandpa, father, brother, son and husband. He constantly wanted to have his grandchildren help him in anything he did. He was a devout Lutheran and a member of Zion Lutheran Church in Matteson. Ted is survived by his wife of nearly 40 years, Judy Regan (neeBecker); 4 children, Timothy (Sarah nee Schilling) Regan of Frankfort, IL, Daniel (Courtney neeBrown) Regan of Oak Park, IL, Kelly (Jeffrey) Thrun of Chicago, IL, and Katie Regan ofPeotone, IL; 9 grandchildren; Lily, Madeline, Timothy, and Grace Regan; Lilah and Emmett Regan; and Jacob, Lucas and Joshua Thrun; and 4 siblings, Patrick Regan, Mary Ellen "Bee"Robbins, Catherine Nelson and Cynthia "Lou" Hagemaster. Memorials should be sent to Side by Side Corporation II, NFP, 428 S. Euclid Ave Apt. 1E Oak Park, IL 60302. His earthly life will be celebrated through a wake at Fedde-Helfrich-Cross Funeral Home in Peotone, IL on Sunday July06, 2014 between 2:00 and 7:00 p.m., and a funeral service on Monday July 07, 2014 at 11:00am at Zion Lutheran Church on 216th Street in Matteson, IL. Visitation will be held at the church from 10:00-11:00 a.m. prior to the funeral service. Burial will follow at Skyline Memorial Park,Monee, IL.

To send flowers to the family in memory of Thaddeus Regan, please visit our flower store.