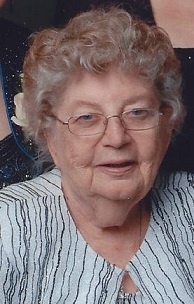 Shirley A. Tadevic, age 93, of Peotone, passed away on Sunday, July 10, 2016 at Miller Healthcare and Rehabilitation Center in Kankakee.

She was a homemaker and a member of St. Paul the Apostle Catholic Church in Peotone. She married the late Thomas H. Tadevic on December 12, 1953 in Orland Park.

She is survived by her nieces and nephews, Judith A. (Edward) Urban of Peotone, David P. Ogle of Homewood, Linda S. Willis of Midlothian, and Roger J. Ogle of Park Forest. She is also survived by numerous great-nieces and great-nephews.

Visitation will be held at the Fedde-Helfrich-Cross Funeral Home on Thursday, July 14 from 3:00-8:00 p.m. A funeral mass will be held at St. Paul the Apostle Catholic Church in Peotone on Friday, July 15, 2016 at 11:00 a.m., Father Roger Kutzner officiating. There will be visitation at the church from 10:00 a.m.-11:00 a.m. prior to the funeral mass. Burial will be at Holy Sepulchre Catholic Cemetery in Alsip, IL. Memorials may be made to the donor’s choice.

To send flowers to the family in memory of Shirley Tadevic, please visit our flower store.