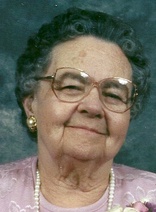 Mrs. Kopman was a homemaker and helped out with the family farm. She was a member of the Green Garden United Methodist Church her entire life. She enjoyed church, farming, and cooking and baking for her family and family gatherings.

She is survived by three sons, LeRoy (Carol) Kopman of Crete, Leslie (Lola) Kopman of Beecher, and Roger (Sharon) Kopman of Peotone; one daughter, Barbara (Don) Matherly of Manteno; a daughter-in-law, Beverly Kopman of Joliet; seven grandchildren; sixteen great-grandchildren; several nieces and nephews; one cousin; and her caregiver, Anna.

To send flowers to the family in memory of Ruth Kopman, please visit our flower store.