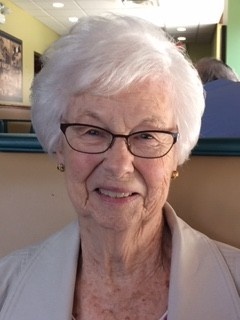 Ruth Warren Daum, 88, passed away peacefully at Riverside Medical Center March 20, 2020. Ruth was born on January 5, 1932 to Herbert and Euthena Warren at their home in Andres, rural Peotone. She attended a one room school house until eighth grade and then graduated from Peotone High School. Ruth married Ralph Daum at West Peotone Church in 1950 during a November blizzard. She worked at a bank in Manteno and later did bookkeeping for the family business, Daum Appliance (formerly Daum Electric) in Peotone.

Ruth was an active resident in the community of Peotone. She was a member of the American Legion Auxiliary, the Women’s Club, the United Methodist Church and a Brownie Leader. She was instrumental in starting Peotone’s first Kindergarten program in 1961. Ruth and Ralph were world travelers, visiting 47 countries. They also spent time in Orange Beach, Alabama and avidly followed the Cubs.

Ruth’s generosity, devotion to family, and her superior pie baking skills will be missed.  Private family services have been held.

To send flowers to the family in memory of Ruth Daum, please visit our flower store.