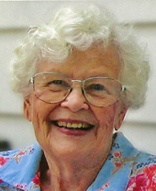 Born April 17, 1916, in Gardner, she was a former schoolteacher, teaching in a one-room schoolhouse for five years and also worked at her husband's Ford Implement Dealership as a secretary/bookkeeper for many years. Rhea was a member of St. Paul's United Church of Christ in Monee, enjoyed gardening, cooking and traveling and especially enjoyed spending time with her family.

She married Dale E. Christenson on July 19, 1939 in Dwight, and he died July 17, 2008. She was also preceded in death by a daughter, Janice Christenson; her parents, Frank and Mable Nelson Barrett; and two sisters, Yvonne Berryhill and Eileen Christensen.

To send flowers to the family in memory of Rhea Christenson, please visit our flower store.