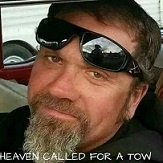 Phil was born on December 11, 1970 in Blue Island, IL. He was the owner/operator of Central Towing in Peotone and a member of the Romin Chariots Car Club of Blue Island. He enjoyed everything cars or anything with an engine (motors are electric) in it. He especially enjoyed building cars.

Visitation will be held on Saturday, December 27, 2014 at the Fedde-Helfrich-Cross Funeral Home from 2:00-7:00 p.m. There will be a funeral service on Saturday, December 27 from the Fedde-Helfich-Cross Funeral Home at 7:00 p.m. Cremation rites will be accorded following services. In lieu of flowers, memorials to J.D.R.F. or the Ronald McDonald House would be appreciated.

To send flowers to the family in memory of Phil Fransen, please visit our flower store.