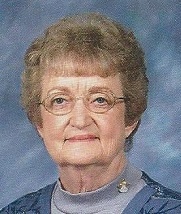 She was born June 8, 1931 in Monee, IL, the daughter of the late Louis and Evelyn (Eickmann) Egdorf. She was a homemaker. She married the late George E. Kampe on September 7, 1952 in Tinley Park, IL. He died on March 24, 1996. Pearl was a member of St. Paul’s United Church of Christ in Monee where she was an active member in the church’s women’s fellowship.

She is survived by a step-son, Larry (Avis) Kampe of Washington; 2 sisters-in-law, Joyce Egdorf of Steger and Dolores Egdorf of Blue Island; 3 nephews, Steve Egdorf of Arizona, Mike Egdorf of Merrionette Park, and Randall Egdorf of Quincy; and 2 nieces, Laurel (Fernando) Urrutia of Texas and Deborah Young of Schererville, IN.

She was preceded in death by her parents; her husband; a sister, Shirley Young; and 2 brothers, Warren and Virgil Egdorf.

To send flowers to the family in memory of Pearl Kampe, please visit our flower store.