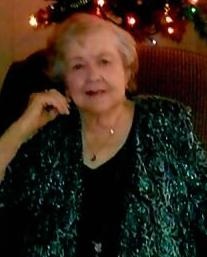 She was born on September 3, 1934 in Manhattan, IL, the daughter of the late Raoul and Aurora (Raymond) Benoit.  She married the late Walter J. Jensen on March 15, 1969 in Sarasota, FL.  He died on July 24, 2004.  She worked as a cook at Beecher Manor Nursing and Rehabilitation Center for many years.  She attended St. Boniface Catholic Church in Monee.

She is survived by four sisters; Ruth Lanoue of Kankakee, Deanna (Larry) Welsh of Peotone, Bonnie (Bill) Devlin of Peotone, and Sandra (Tom) Robbins of Bourbonnais.  She is also survived by numerous nieces and nephews.  She was preceded in death by her parents, her husband, four brothers; Rene, Gerald, Lawrence, and Maynard Benoit; and four sisters, Gloria Demers, Rosanna Kempen, Mary Anderson, and Judy Fear.

Cremation rites have been accorded.  Private graveside services will be held at a later date.

To send flowers to the family in memory of Nina Jensen, please visit our flower store.