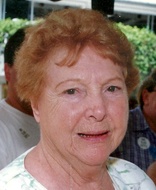 She was born September 14, 1919, in Chicago. She was a homemaker and a member of Immanuel United Church of Christ in Peotone. She enjoyed gardening and playing bunco.

Mrs. Thomas is survived by a daughter, Julie (Keith) Becker of Peotone; numerous grandchildren and great-grandchildren; and a sister, Ann Jepsen of Seattle, Wash.

She was preceded in death by her husband, Eric Thomas, whom she married on June 19, 1937 in Chicago; a son, Daniel Thomas; a daughter, Barbara "Susie" Becker; her parents, Dominick and Antoinette (Orlando) Dimenn; five brothers; and two sisters.

Visitation 9 a.m. until the hour of services at 10 a.m. Saturday, February 1, at Immanuel United Church of Christ in Peotone, with the Rev. Dwight Gorbold officiating. Burial in Skyline Memorial Park in Monee. Memorials may be made to the Alzheimer's Association.

To send flowers to the family in memory of Mary Thomas, please visit our flower store.