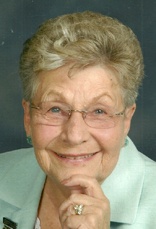 Visitation will be held at the Fedde-Helfrich-Cross Funeral Home on Sunday, October 13, 2013 from 3:00-7:00 p.m. A Mass of Christian Burial will be celebrated at St. Paul the Apostle Catholic Church in Peotone on Monday, October 14, 2013 at 10:30 a.m., Father John Regan will officiate. Interment will follow at Calvary/Mt. St. Patrick Catholic Cemetery in Manhattan, IL. Memorials to the family's wishes would be appreciated.

She was born May 21, 1926 in Minneapolis, MN, the daughter of the late Harold and Othylia (Gardin) Garmoe. She married the late Patrick John Murray Sr. (February 28, 1996) in Chicago, IL on May 22, 1948. She was a devoted wife and mother. Her family was always the most important thing in her life. She was a member of St. Paul the Apostle Catholic Church in Peotone. She was a member and past president of the Council of Catholic Women and was the recipient of the organization's first Woman of the Year award. She was a past member of the Peotone Garden Club and Junior Women's Club. She enjoyed baking, knitting, birds, and flowers.

She was preceded in death by her parents, her husband; a daughter, Carol Lynn Murray; a grandson, Jeffrey Stubblefield; two brothers, Donald and Robert Garmoe; and a sister, Lorraine Greinke.

To send flowers to the family in memory of Marlys Murray, please visit our flower store.