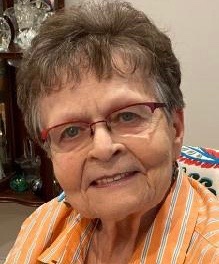 Marjorie R. Eberle Fieffer, age 79, of Biloxi, MS, formerly of Peotone, passed away on Wednesday, May 20, 2020 at the Lighthouse Assisted Living and Memory Care in Ocean Springs, MS.

She was born on March 30, 1941 in Williamsport, IN, the daughter of William and Florence (Brier) Munson.  Marjorie worked as a nurse at the Peotone Bensenville Home for over 25 years.  She was an avid reader and enjoyed visiting the local library.  She adored her children, her grandchildren, and chocolate.

Private family graveside services will be held and live streamed on the Fedde-Helfrich-Cross Funeral Home Facebook Page on Wednesday, May 27, 2020 at 11:00 a.m., Pastor Richard Young officiating.  In lieu of flowers, memorials may be directed to the Alzheimer’s Association.

To send flowers to the family in memory of Marjorie Eberle Fieffer, please visit our flower store.