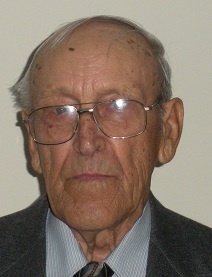 Manrow Orville Hameister, of Peotone, age 95, passed away peacefully at his home on Monday, October 12 with his family by his side. Manny, as he was known by his friends and family, was born December 29, 1919 at his home in rural Beecher to Ludwig & Katherine (Buhr) Hameister. He attended Beecher Zion Lutheran Church and school thru 8thgrade. He was then needed to help on the family farm.

He married Anna Carstens on May 19, 1946 at Immanuel Evangelical and Reformed Church in Peotone, where he was a member. They moved to a farm three miles west of Peotone where they had two daughters, Bonnie and Judy. They farmed soybeans, corn, oats and hay and raised dairy cattle, hogs, chickens, a few cats and always a dog.

Manny gave up the dairy in 1970 and they were able to travel more, going to Europe, Hawaii, and around the states.

Manny was very involved with the Will South Cook County Conservation District, local drainage districts, and a member of the American Milk Producers, Immanuel United Church of Christ in Peotone, Bradley Moose Lodge, and the Will County Farm Bureau.

Memorials may be made to Immanuel United Church of Christ, Vitas Hospice, or family’s wishes.

To send flowers to the family in memory of Manrow Hameister, please visit our flower store.