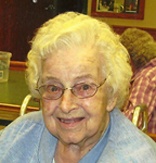 Lorraine Mae Sippel nee Mancke, 94, of Peotone died Monday, December 16, 2013, at Prairieview Lutheran Home in Danforth, IL. Visitation will be from 4-8 p.m. Thursday, December 19 at the Fedde-Helfrich-Cross Funeral Home, Peotone. Funeral Services will be held from St. John's United Church of Christ, North Peotone on Friday, December 20 at 10:30 a.m., Rev. Bruce Salter officiating. Visitation will be held at the church on Friday from 9:30 a.m.-10:30 a.m. prior to the funeral service. Burial will be in Peotone Cemetery. Pallbearers will be Ed Dersch, Jason Stonchus, Douglas Sandberg, Rhett Rademacher, Kyle Rademacher, Jerry Eipers. In lieu of flowers, donations to Misericordia Home or Prairieview Lutheran Home would be appreciated.

Mrs. Sippel lived and farmed in Green Garden Township with her husband, Gilbert, and then moved Peotone in 1957. Lorraine and Gilbert owned and operated Sippel's Shoppe in Peotone until their retirement in 1987.

She enjoyed playing and watching golf, painting with oils, gardening, bowling, playing cards, sewing, fishing, dancing and traveling. Mrs. Sippel was a member of St. John's United Church of Christ North Peotone for over 58 years, taught Sunday School, and a was member and president of the Womens' Fellowship. She enjoyed being with her grandchildren and great-grandchildren.

To send flowers to the family in memory of Lorraine Sippel, please visit our flower store.