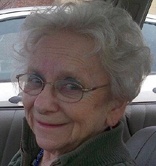 She was born on December 29, 1933 in Chicago, IL, the daughter of the late Arthur and Bernice (Lucas) Heinberg. She married the late George R. Wilson (12-23-1991) in Dolton, IL on November 22, 1952. She was a retired employee of Federal Signal in University Park, IL. She was a member of Immanuel United Church of Christ in Peotone and enjoyed gardening, especially her flower garden. She loved her dog, Boots, who gave her great companionship.

She was preceded in death by her parents; her husband; her son, Michael A. Wilson; a daughter-in-law, Crystalle Wilson; a brother, Robert Heinberg; and a sister, Faye Adams.
Visitation will be held at the Fedde-Helfrich-Cross Funeral Home on Wednesday, March 19, 2014 from 4:00 p.m. to 8:00 p.m. Funeral services will be held at the funeral home on Wednesday, March 19 at 8:00 p.m. Private burial will be at Peotone Cemetery. Memorials to the Alzheimer's Association would be appreciated.
To send flowers to the family in memory of Lois Wilson, please visit our flower store.