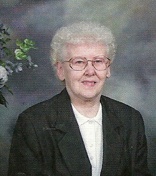 She was born April 15, 1928, in Beecher. She was a retired employee of Chemtron and a homemaker. She was a member of Immanuel United Church of Christ in Peotone.

She was preceded in death by her father, Herbert Fette; her mother, Alice Matthies Fette Schroeder; step-father, Alfred Schroeder; a sister-in-law, Sharon Schroeder; and a grandson, Billy Fabian.

Visitation 4 to 8 p.m. Monday, April 7, at Fedde-Helfrich-Cross Funeral Home in Peotone. Services 11 a.m. Tuesday, April 8, at the funeral home, with the Rev. Dwight Gorbold officiating. Burial in Peotone Cemetery. Memorials may be made to Immanuel United Church of Christ.

To send flowers to the family in memory of Lois Fabian, please visit our flower store.