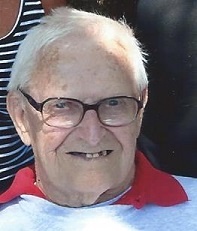 Lester F. Silcox, age 92, of Green Garden (Frankfort), IL, formerly of Monee, passed away on Sunday, May 31, 2015 at the Miller Health Care and Rehabilitation Center in Kankakee, IL.

He was a World War II Navy Veteran and a former member of the Doss Malone American Legion Post in Monee. He was a member of St. Paul’s United Church of Christ in Monee and the Peotone Prairie Cardinals Camping Club. He enjoyed making wood crafts and looming rag rugs and also delivered Meals on Wheels for many years in Monee. He was a retired supervisor with the Will County Department of Transportation and also formerly worked at Portion Packaging of South Chicago Heights.

He was preceded in death by his parents; his wife; a grandson, Scott Christensen (1987); six brothers, Orville, Richard, Roy, Alpha, Victor, and James; and two sisters, Helen Becker and Mildred Hensley Lillgaard.

To send flowers to the family in memory of Lester Silcox, please visit our flower store.