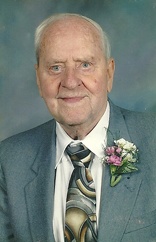 He was born February 9, 1922 in Chicago, the son of the late George and Mabel Knight. He married the late Doris P. Knight on April 3, 1948 in Chicago. She preceded him in death on January 13, 1995. He worked at Ford Motor Company in Chicago Heights and retired after more than 30 years of employment. He was a U.S. Army veteran serving during World War II. He enjoyed bowling, bingo, and traveling to Florida for the winter.
Mr. Knight is survived by 3 children; Jacqueline (Dan) Lafferty of Monee, Jeanne (Ron) Mansmith of Monee, and John W. (Peg) Knight Jr. of Frankfort; 4 grandchildren, Marc (Meredith) Lafferty, Tom (Kelly) Lafferty, Ron (Nicole) Mansmith, and Jennifer (Shawn) Weekes; and 8 great-grandchildren.

He was preceded in death by his parents, his wife, and 3 sisters.

To send flowers to the family in memory of John Knight Sr, please visit our flower store.