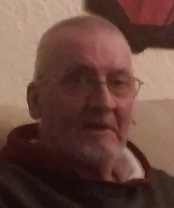 John A. Brown, age 66, of Peotone passed away on Saturday, December 19, 2015, at his home, suddenly. He was born on June 17, 1949 in Joliet, IL. He was a retired truck driver working for Evergreen Sod Farm of Peotone. He enjoyed bowling, watching professional bowling on television, and muscle cars. He liked fast cars and fast women.

He is survived by his mother, Evelyn (Carcelli) Brown of Peotone; two daughters, Michelle (Joel) Marquez and Christina (Eduardo) Noriega both of Lexington, KY; eight grandchildren; 6 great-grandchildren; one brother, Danny (Jody) Brown of Kankakee; and two nieces, Kaitlyn and Jadyn. He was preceded in death by his father, Delbert Brown; and an infant daughter, Danielle.

Cremation rites have been accorded. All services will be private.

To send flowers to the family in memory of John Brown, please visit our flower store.