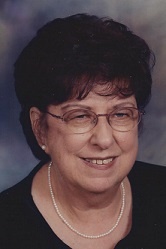 She was born December 27, 1929 in Kankakee, IL, the daughter of the late Lyle and Elsie (Eisele) Bertrand. She married the late James J. Brunner on September 9, 1950 at Immanuel United Church of Christ in Peotone. He preceded her in death on April 22, 1996. She was a retired teller at Peotone Bank and Trust. She was a long time member of Immanuel United Church of Christ in Peotone where she was a member of the choir and bell choir and served as a teacher and treasurer of the Sunday school.

A memorial service will be held at the Fedde-Helfrich-Cross Funeral Home on Saturday, December 13, 2014 at 6:00 p.m., Rev. Dwight Gorbold officiating. Private burial will be at Peotone Cemetery. In lieu of flowers, memorials to the music ministry at Immanuel United Church of Christ or the ALS Foundation would be appreciated.

To send flowers to the family in memory of Jean Brunner, please visit our flower store.