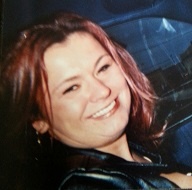 She was born on June 29, 1976 in Hinsdale, IL. She was a homemaker and a mother. She enjoyed volunteering at the Peotone American Legion. She is survived by her husband, Mark C. Hoover of Beecher; a daughter, Courtnie Shawver; a son, Nicholas Hoover; her mother, Debra Harbin of Peotone; her father and step-mother, Jack (Rhonda) Smith of Mississippi; a sister, Monica Smith of Peotone; a step-sister, Julie Jamieson Duffek of Florida; a step-brother, Scott Rush of Wisconsin; and three step-children, Tiffany, Andrew, and Danial Hoover. She is also survived by numerous Aunts, Uncles, Nieces, Nephews, and Cousins.

Cremation rites have been accorded. A memorial visitation will be held at the Fedde-Helfrich-Cross Funeral Home in Peotone on Saturday, August 15 from 3:00-6:00 p.m. with a memorial service at 6:00 p.m. In lieu of flowers, memorials to the family would be appreciated.

To send flowers to the family in memory of Jamie Smith, please visit our flower store.