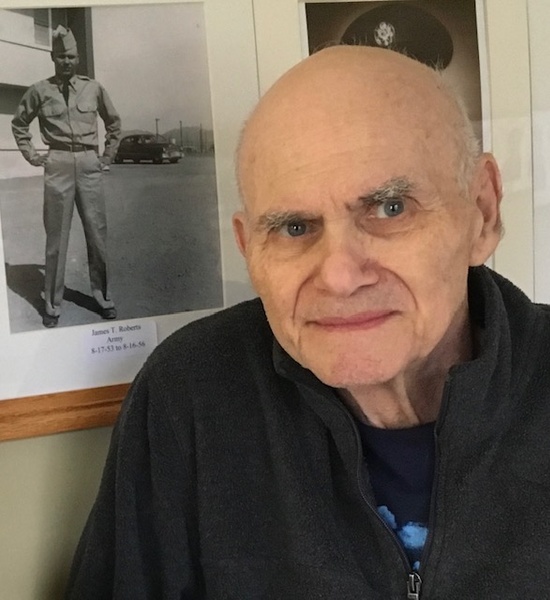 He was born on May 25, 1935 in Harvey, IL.  He was a United States Army Veteran serving from 1953-1956. He married Vinnie Christopher on September 14, 1957 in Posen, IL.   He was a salesman and owned and operated his own business, MoneyMakers.  He was a member of St. Stanislaus Bishop and Martyr Catholic Church in Posen, IL.  He was an avid bowler and once bowled a 299 game.

He is survived by his father, Amos Roberts; his daughter and son-in-law, Karen and Michael Minock of Peotone; two grandchildren, Michaela and Jacob Minock; and a brother, Bill Roberts of Lockport.  He was preceded in death by his wife, Vinnie (Christopher) Roberts; his mother, Bernice (Czupek) Roberts; and a brother, Bob Roberts.

Visitation will be held at the Fedde-Helfrich-Cross Funeral Home on Friday, January 24 from 3:00 p.m.-8:00 p.m.  A funeral mass will be celebrated at St. Paul the Apostle Catholic Church on Saturday, January 25 at 10:00 a.m., Father Roger Kutzner officiating.  Visitation will be held at the church from 9:00 a.m.-10:00 a.m. prior to the funeral mass.  Interment will follow at Holy Sepulchre Catholic Cemetery in Alsip, IL.  In lieu of flowers, memorials may be given to the Illinois Veterans’ Home, 1 Veterans’ Dr., Manteno, IL 60950 or Hospice of Kankakee Valley, 482 Main St. NW, Bourbonnais, IL 60914.

To send flowers to the family in memory of James "Jim" Roberts, please visit our flower store.