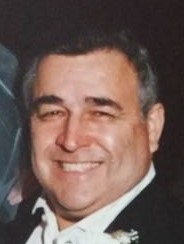 Jim was born and raised in Woonsocket and Pawtucket, Rhode Island. As a young man he served in the Air Force for four years. During his tenure in the military, he spent time in North Africa and was stationed at the Homestead Air Reserve Base in Homestead, Florida.

While in service in Florida, Jim met his future wife Barbara. She was vacationing there while in her first year of nursing school. They dated for several years, and once Barbara graduated from nursing school, they moved to Chicago - her home town - married and started a family.

They lived on the South side of Chicago in the Hegewisch neighborhood where they had all four of their children, Kathy, Joe, Kristi and Patty. Jim worked for the Chicago Transit Authority as a bus driver (when they still made change for fares!). He attended the Washburne Trade School for pipefitting and became a member of the Pipefitters Local Union 597.

The family moved to Lynwood, Illinois, a south suburb of Chicago, where all their children attended and graduated from Thornton Fractional South High School. Jim worked for the CTA for many years, retiring in 1993 as the Superintendent of Building Maintenance.

Jim and his son-in-law Brian (Patty’s husband) built a home for the family in Peotone in 1990. Here they hosted many family gatherings, reunions, holiday events, showers, etc.

Jim was an avid motorcyclist, enjoying Enduro Racing for many years. He raced with the Hill and Gully Motorcycle Club and was a top-ranked cycler for his age group in Enduro racing in the State of Illinois. He played Warhammer, loved to camp and canoe (the family camped for many years as members of the Calumet Chiefs Camping Club) and enjoyed many family road-trip vacations. Jim also loved to shop and was always in search of a good bargain. Later in life, Jim managed the Super Wash on Wilmington Road in Peotone.

He is survived by his wife Barbara, and children Kathy, Joe and Pam, Kristi and Kevin, Patty and Brian. He is also survived by nine grandchildren: David, Frankie, Lena, Brenna, Zoe, Eliana, Brittany, Jaimie, Brian and two great-grandchildren, Dimitri and a sweet baby boy that Jaimie is expecting in September.

To send flowers to the family in memory of James Flores, please visit our flower store.