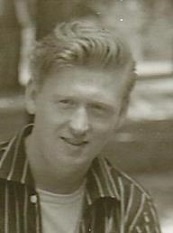 He was born October 5, 1933 in Brighton, MI, the son of the late George and Margaret (Monahan) Balmer. He grew up in Chicago. He was married to the late Joyce J. (Montalbano) Balmer. She passed away on December 15, 2001. They lived in Lansing, IL and then moved to Green Garden where they raised their family. He was a member of the International Brotherhood of Electrical Workers (I.B.E.W.) Local #9. He worked for the Water Reclamation District as a power house dispatcher until his retirement. After retirement they moved to Decaturville, TN. He was a US Air Force Korean Conflict Veteran and a member of the American Legion Post 77 in Lexington, TN. He was of the Catholic faith. He truly enjoyed his retirement in Tennessee and all of the close friendships he made during that time.

He is survived by five children; Kathleen (Phil) Talent of Frankfort, IL, Carrie (Bob) Petrowski of Tinley Park, IL, Joan (David) Ball of Carmel, IN, William J. Balmer of Lansing, IL, and James (Erin Schwiesow) Balmer Jr. of Peotone, IL; seventeen grandchildren; and numerous nieces and nephews. He was preceded in death by his parents, his wife; a brother, William F. Balmer; and a sister, Eleanor Donley.

Visitation will be held at the Fedde-Helfrich-Cross Funeral Home on Tuesday, November 25 from 3:00-8:00 p.m. A Mass of Christian Burial will be held at St. Paul the Apostle Catholic Church in Peotone on Wednesday, November 26 at 11:00 a.m., Father Roger Kutzner officiating. Interment will be at Holy Sepulchre Cemetery, Alsip, IL. Memorials to the Family’s Wishes would be appreciated.

To send flowers to the family in memory of James Balmer, Sr, please visit our flower store.