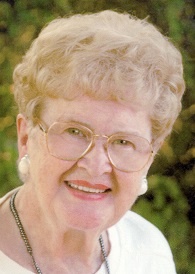 She was born September 2, 1919 in Detroit City, MI, the daughter of the late Anthony and Ursula (Yakas) Meldzius. She married the late George Kwain (deceased 1953) in 1937 and the late Adolph Stumbris (deceased 2006) in 1954. She is also preceded in death by a daughter, Arlene Joanne Kwain. She is survived by two sons, Dennis G.J. Kwain and George M. Kwain of Peotone; and a grandson, Damian Kwain.

Helen was a 1936 graduate of Harper High School in Chicago and also the Doree School of Cosmetology. She was a retired cosmetologist. She was a member of St. Paul the Apostle Catholic Church in Peotone where she served as a cantor, minister of Eucharist, and lector. She was also a member of the General Federation Women’s Club, Lithuanian Heritage Club, and the Peotone Prairie Cardinals

Visitation will be held on Friday, December 19 at the Fedde-Helfrich-Cross Funeral Home in Peotone from 3:00-8:00 p.m. Visitation will also be held at St. Paul the Apostle Catholic Church in Peotone on Saturday, December 20 from 9:30 a.m. until the time of the funeral mass at 10:30 a.m., Father Roger Kutzner officiating. Burial will be at St. Casimir Catholic Cemetery, Chicago, IL. Memorials to the Family’s Wishes would be appreciated.

To send flowers to the family in memory of Helen Stumbris, please visit our flower store.