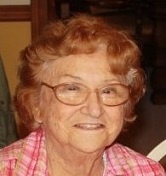 She was born July 31, 1921 in Bath, England, the daughter of the late Frank and Amy (Rodway) Butler. She married the late Charles R. Nelson on March 2, 1945 in Bath, England. He died on May 5, 1991. She was a member of the Green Garden United Methodist Church for almost 50 years and was affiliated with the Wilton Center Federated Church for the past few years. She served her church in Green Garden by providing the altar flowers for over 35 years. She loved to garden and knit and enjoyed bowling.

Cremation rites have been accorded. A memorial visitation will be held at the Wilton Center Federated Church on Friday, December 5 from 10:00 a.m.-11:30 a.m. A memorial service will follow at 11:30 a.m., Pastor Rich DeVries officiating. In lieu of flowers, memorials to MorningStar Mission of Joliet or the family’s wishes would be appreciated.

To send flowers to the family in memory of Gladys Gladys, please visit our flower store.