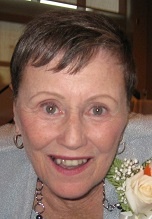 She was born on October 3, 1937 in Brooklyn, NY, the daughter of the late Florian Frederick and Celia Helen (Jablonski) Malczynski. She married her husband, Kenneth M. Randell, on March 8, 1969 at St. Paul Lutheran Church in Chicago Heights, IL. She worked as a secretary for many different businesses and organizations over the years. She retired from Early Prevention of School Failure in Peotone in 1999. She was a former member of Hope Lutheran Church in Park Forest, IL. Gerry loved to sew, cross stitch, read, and cook and bake for her family. She was a loving, caring wife, mother, grandmother and friend. She especially loved spending time with her children, grandchildren, and great-grandchildren.

To send flowers to the family in memory of Geraldine Randell, please visit our flower store.