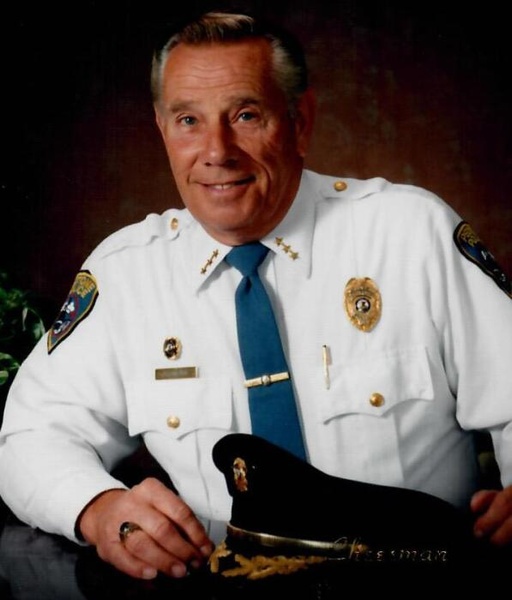 He was born on December 9, 1935 in Lima, Ohio, the son of Nolan and Dorothy Bogart.  He married Anita Gribbins on June 28, 1972.  In his early years he worked for a construction company, worked for the Lima News in Ohio, and operated a restaurant. In 1961 he found his true passion, being a police officer. His police career started in Van Wert, Ohio. He served as a patrolman from 1961-1965. From 1965-1967 he joined the Sheriff’s Department in Van Wert County. By 1967, he had the opportunity to move to Peotone, Illinois. He worked at Bennett Industries as a supervisor for production and inventory control.  In 1969, there was opening for a police officer with the Peotone Police Department. He moved to the rank of Chief of Police in 1976, retiring in 1998. It was a challenging career, but a career he was most proud of. He joined the Will County Police Chief’s Association in 1974 where he was later nominated as President of the Will County Police Chief’s Association in 1980.  Many people will also remember him as the “Painter.” He painted and wallpapered for many years after he got off his police shift.  After his retirement, Gary and his wife retired to Monticello, Indiana where they enjoyed their beautiful lake home. He couldn’t stay retired for long, he missed interaction with people so he spent 17 years working at Indiana Beach Amusement Park as the “Boom Ball Man.”   Every weekend you could find him out on the lake boating. If he wasn’t on the water with his family, he liked to golf and fish.  He was an avid fan of wrestling, boxing and watching car races.

Cremation rites have been accorded.  A memorial visitation will be held at the Fedde-Helfrich-Cross Funeral Home on Sunday, September 27 from 11:00 a.m.-3:00 p.m. with a memorial service at 3:00 p.m., Christina Lemmon officiating.   Due to the global health pandemic (COVID-19) the wearing of a face covering will be required to enter the funeral home and social distancing must be observed.  Inurnment will follow at Peotone Cemetery.

To send flowers to the family in memory of Gary Bogart, please visit our flower store.