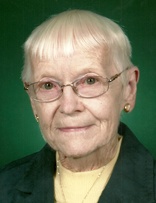 Florence Anna Carstens, age 92, of Peotone, passed away peacefully on Friday, April 4, 2014 at her son-in-law's home in Bourbonnais.

She was born September 13, 1921 in Chicago Heights, the daughter of the late Edwin and Lorena (Bode) Stuenkel. She resided in Beecher for several years until the time of her marriage. She married the late Roy Carstens on April 5, 1942 in Peotone. He died on April 2, 1985. She was also preceded in death by her daughter, Karen (Carstens) Tietjens on March 4, 2011; and a brother, Norman Stuenkel.

Mrs. Carstens was a homemaker and a farmer's wife. She was a member of Immanuel United Church of Christ in Peotone and the church's Women's Fellowship. She enjoyed reading, gardening, quilting, traveling, and baking.

Visitation will be held on Sunday, April 13, 2014 from 11:00 a.m. until 1:00 p.m. at the Fedde-Helfrich-Cross Funeral Home in Peotone. A memorial service will be held on Sunday, April 13, 2014 at 1:30 p.m. at Immanuel United Church of Christ in Peotone. Interment will be at Peotone Cemetery. Memorials to the Immanuel United Church of Christ or Hospice of Kankakee Valley would be appreciated.
To send flowers to the family in memory of Florence Carstens, please visit our flower store.