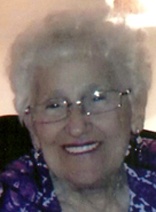 Elvera Schmidt went to be with the Lord on March 22, 2014 at her home in Peotone after an extended illness. Elvera Jacobucci, the daughter of the late Liborio and Alfonsina (Petrarca) Jacobucci, was born November 27, 1927 in Chicago Heights where she was raised and graduated from Bloom High School.

Family was a top priority for "Grandma" Schmidt. Her boundless love for her husband and children spread to her grandchildren and great-grandchildren, and was returned by them all. Her greatest joy was having her family around her; the early spaghetti dinners up to her recent Christmas gatherings which were full of love and laughter.

Vera loved music and movies and was still dancing at her 75th birthday party. She knew all the stars from early movies and much of the dialogue. She enjoyed going to concerts, plays, movies, and enjoyed life to the fullest until illness held her down.

She was a member of Glory to God Lutheran Church, Tinley Park, where she was in attendance regularly until illness kept her home. Above all, she had a faith that shone through, during happy times or as she faced the trials of life. She will be missed by the many family and friends that she touched with her faith and love.

Visitation will be held at the Fedde-Helfrich-Cross Funeral Home, 112 W. Main St., Peotone, on Wednesday, March 26 from 3:00-8:00 p.m. Funeral services will be held at Glory to God Lutheran Church, 18401 66th Ave., Tinley Park on Thursday, March 27 at 10:00 a.m., Pastor David Ernest officiating. Interment will follow at St. Paul's Lutheran Church Cemetery in Flossmoor. In lieu of flowers, memorial gifts in her name may be directed to Glory to God Lutheran Church.
To send flowers to the family in memory of Elvera Schmidt, please visit our flower store.