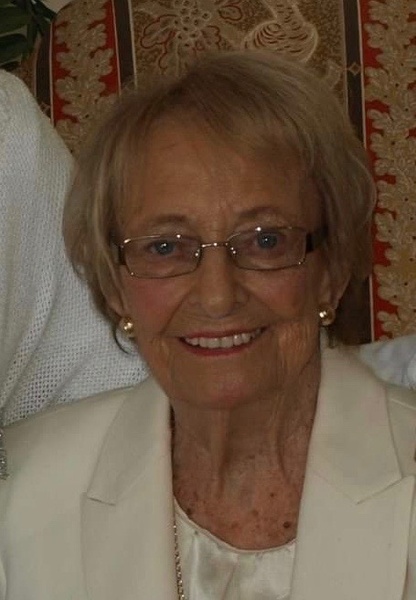 Born January 8, 1924 at Ingalls Memorial Hospital, Eleanor O. Rathje (nee Jensen) passed away at her home in Peotone on Sunday, April 5, 2020. She is survived by her devoted son Paul C. Rathje II and daughter-in-law Sherrie Rathje; her loving granddaughter Alisyn Franzen and grandson-in-law Justin and great-grandsons Nolan, Brock, and Evan; and her beloved grandson Paul C. Rathje III and granddaughter-in-law Amanda Rathje and great-grandchildren Kamryn and Mason. She is also survived by her sister, Esther Hansen, and many nieces and nephews. She was preceded in death by her devoted husband of 64 years, Paul C. Rathje; two brothers and her sisters-in-law, Robert (Virginia) Jensen and Thor (Mary Lou) Jensen; a sister-in-law and brother-in-law, Helen (Leo) Bieronski; and a brother-in-law Stan Hansen.

Eleanor grew up in Harvey and attended Thornton Township High School, where she graduated in 1942 and attended Dana College in Blair, Nebraska for one year. After that, she was the office manager for the Catalina Swimwear office at the Chicago Merchandise Mart. Her exposure to showrooms displaying the latest in decor at the Mart contributed to her sense of style and to a talent for decorating, manifested in her homes over the years. Eventually, she met Paul, and the two were married at Golgotha Lutheran Church in Chicago on October 4, 1952. They resided in the Matteson area before eventually building a house and settling in Peotone in 1978, where they continued to reside for the rest of their lives. They also enjoyed spending their time during the winter months at their condo in Florida and taking summer weekend getaways to Michigan.

Eleanor’s greatest joy in life was her family. She spent the majority of her life as a homemaker, caring for her husband and son. Later in life, she especially treasured the times she spent with the youngest members of the family, at first her two grandchildren and as time went on, her five great-grandchildren, as they all loved flocking to her and sharing stories, pictures, laughs, and more.

When she wasn’t focused on her family, Eleanor was focused on sports. As an avid Cubs fan, there were not too many games that Eleanor would miss on the TV or radio. During the fall, she could be found rooting on Ohio State football. Be it baseball, football, basketball, or anything else, Eleanor could carry a conversation with the best sports minds in the family. In her younger years, she enjoyed playing golf and tennis. She was a member of the American Legion Auxiliary and worked with several charitable organizations.

Eleanor was a member of Trinity Lutheran Church in Park Forest for over 40 years, where she participated in the church choir. Due to current circumstances, private family services will be held.  There will be a Live Stream of graveside services from Peotone Cemetery on Friday, April 10 at 1:00 p.m. on the Fedde-Helfrich-Cross Funeral Home Facebook page.  https://www.facebook.com/FeddeHelfrichCrossFuneralHome/?ref=bookmarks

In lieu of flowers, contributions may be made in memory of Eleanor to Trinity Lutheran Church, 102 Marquette St., Park Forest, IL 60466.

To send flowers to the family in memory of Eleanor Rathje, please visit our flower store.