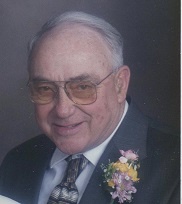 Edwin was born in Joliet, Illinois on May 5, 1930 to Iva (nee Ruhlander) and Edwin E. Moore. He graduated from Joliet High School in 1948.

He married Shirley Goolsby on April 17, 1949 at First Christian Church in Joliet. Shirley and Ed farmed in Wilton Center for 52 years. Edwin was active in Wilton Center Federated Church, served on the District 207 School Board, and volunteered for many farming organization. Ed enjoyed woodworking, traveling, playing cards, and spending time with family. Edwin shared his love of wood working by making many beautiful wood clocks, cribs and furniture for family and friends.

He was preceded in death by his wife Shirley, his parents Iva (nee Ruhlander) and Edwin E. Moore, his brothers, William and Tom Moore and sister, Anita Bartol.

Visitation will be held at the Fedde-Helfrich-Cross Funeral Home in Peotone on Sunday, April 12 from 2:00-7:00 p.m. Funeral services will be held at the Wilton Center Federated Church, 14101 W. Joliet Rd., Manhattan, IL on Monday, April 13 at 11:00 a.m., Pastor Rich DeVries officiating. There will be visitation at the church from 10:00 a.m. until the time of service. Interment will be at Wilton Center Cemetery. Memorial gifts to the Wilton Center Federated Church would be appreciated.

To send flowers to the family in memory of Edwin Moore, please visit our flower store.