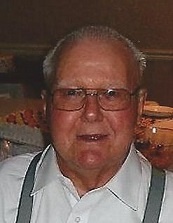 Earl was a farmer, worked at Andres Elevator and retired from Mobil Chemical in Frankfort. He was a member of the Will County Farm Bureau and a Lifetimer member of the Peotone Sportsmen's Club. He enjoyed fishing, gardening, playing cards and watching Chicago Cubs baseball.

Visitation will be from 3 p.m. to 8 p.m. Friday at Fedde-Helfrich-Cross Funeral Home in Peotone. Funeral services will be at 11 a.m. Saturday, also at the funeral home. Burial will be in Wesley Cemetery in Wilmington. Pallbearers will be Michael Patton, Kevin and Brian Meyer, Mark and Earl Welsh III, Jason and Tucker Bade. Memorials may be made to the family's wishes.

To send flowers to the family in memory of Earl Welsh, Sr, please visit our flower store.