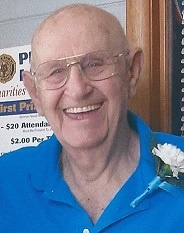 Born April 17th, 1929, son of Ethel Harriette Cash Thurman and Jay Leone Thurman. He was in the Army, 101st Airborne. He worked as an Auto Mechanic, then in Parts, Jack Brown Buick, Roy Lang, and Dralle Chevrolet. He loved working in the yard, and building different things. He loved going to the River, aka The River Rats, and building the biggest campfires. He loved to travel to different places and never liked taking the same way twice. He was still friends with his high school buddies “The Old Gang” from West Pullman.

To send flowers to the family in memory of Donald Thurman, please visit our flower store.