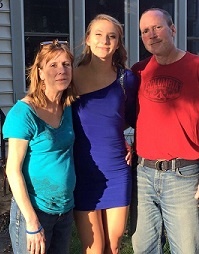 He is survived by his parents, Kenneth and Virginia (Jecman) Kurowski of Park Forest. Christopher is also survived by his wife, Gayle (Halverson) Kurowski who he married on October 1, 1994 at Zion Lutheran Church in Beecher; his daughter, Isabelle Kurowski of Peotone; his twin sister, Debbie (George Jr.) Peach of Crown Point, IN; his brother, Jeff (Christie) Kurowski of Elk Grove Village; nieces and nephews, Nathan and Samantha Peach, Aleksy and Lukas Kurowski, Elizabeth Latino, Justin Finley, and Jesse, Jack, and Erika Halverson; his father-in-law and mother-in-law, Jacque and Betty Halverson of Monee; two sisters-in-law, Cheryl (Randall) Bettenhausen of Peotone and Sandree (Scot) Latino of Manteno; one brother-in-law, Erik (Kim) Halverson of Peotone; and long-time friend and business partner, Jeff Baker of Peotone.

A memorial visitation will be held at the Fedde-Helfrich-Cross Funeral Home on Monday, April 25 from 5:00-7:00 p.m. Cremation rites have been accorded. In lieu of flowers, memorials to the family would be appreciated.

To send flowers to the family in memory of Christopher Kurowski, please visit our flower store.