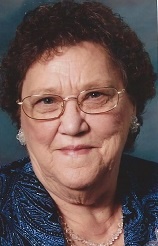 She was born on March 13, 1938 in Mountain Lake, MN, the daughter of the late Elmer and Verna (Langerman) Rosin. She married the late Ralph E. Cann on September 20, 1962 in Aurelia, Iowa. He died on April 14, 1993. She formerly worked at Teresa Pizza in Peotone, Peotone Supermarket, JC Penney, as well as alongside her husband on the family farm. She was a member of the First Presbyterian Church of Peotone where she helped organize and run the church’s antique show. She was an avid bingo player playing at the Peotone American Legion and Manteno Sportsmen’s Club. She enjoyed crafts, crocheting and playing cards. Her grandchildren and great-grandchildren were the joy of her life.

She is survived by her son, Jeff (Kim) Cann of Milford; three step-children, Roger (Karen) Cann of Normal, Wayne (Joan) Cann of Peotone, and Debbie (Mark) Girling of Manteno; 12 grandchildren; and 7 great-grandchildren. She was preceded in death by her parents, her husband; and a brother, Duane Rosin.

Visitation will be held at the Fedde-Helfrich-Cross Funeral Home on Sunday, April 10 from 2:00-6:00 p.m. Funeral services will be held at the First Presbyterian Church of Peotone on Monday, April 11 at 11:00 a.m., Rev. Jonathan Krogh officiating. There will be additional visitation at the church from 10:00-11:00 a.m. prior to service. Burial will be at Peotone Cemetery. Memorials to the First Presbyterian Church of Peotone would be appreciated.

To send flowers to the family in memory of Carol Cann, please visit our flower store.