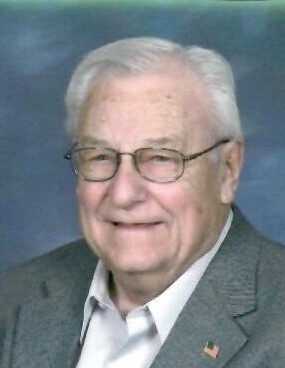 Calvin was born on December 19, 1925 in Peotone, the son of the late Charles and Valeria (Loitz) Younker.  He was a retired rural mail carrier for the U.S. Post Office, a former sales manager at Dralle Chevrolet and Buick in Peotone, and was also the former lounge manager at the Peotone American Legion Post 392.  He was a World War II Navy Veteran and a 70-year member of the Peotone American Legion Post 392.  He was a member of Immanuel United Church of Christ in Peotone and the Illiana Jazz club.  He was an avid Chicago Cubs fans, enjoyed music, and was a drummer for several area bands over the course of his life.

He is survived by his son and daughter-in-law, Gary (Mary) Younker of Chicago; 5 grandchildren, Stacey (Jayson) Borrelli, Jaime Wascher, Jordan (Mike) Toufar, Jake Younker, and Kelly Chiaro; 7 great-grandchildren, Jared, Regan, Nico, Ryan, Charlotte, Lorenzo, and Mackenna; a former spouse, Shirley Younker of Peotone; a daughter-in-law, Toni Younker of Manhattan; and several nieces and nephews.  He was preceded in death by his parents; and a sister and brother-in-law, Charlene V. and Charles “Chuck” Darling.

Visitation will be held at the Fedde-Helfrich-Cross Funeral Home on Sunday, January 28 from 1:00 p.m.-4:00 p.m with a funeral service being held at 4:00 p.m., Rev. Dwight Gorbold officiating.  Private burial will take place at Peotone Cemetery, In lieu of flowers, memorials to the Immanuel United Church of Christ would be appreciated.

To send flowers to the family in memory of Calvin Younker, please visit our flower store.