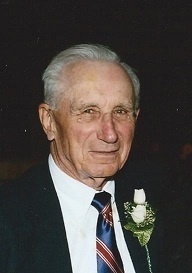 He was born on May 17, 1925 in Blue Island, IL, the son of the late Arnold and Lillian (Andres) Landeck. He was a US Navy World War II Veteran. He played minor league baseball for the New York Yankees organization. He then worked in management for Sears Roebuck Company retiring in 1981. He was an avid golfer and sports enthusiast.

He is survived by two daughters, Linda (Mark) Zebrowski and Bonnie (William) Matthies both of Peotone; four grandchildren, Matthew (Cassie) Zebrowski, Nathan Matthies, Sarah (Kyle) Hankey, and Meghan (Michael Thompson) Matthies; and three great-grandchildren, Jack Zebrowski and Gabe and Ginnie Hankey. He was preceded in death by his parents; and his wife, Virginia (Skinner) Landeck.

Cremation rites have been accorded. In lieu of flowers, memorials to Faith Place of Prairieview Lutheran Home in Danforth, IL would be appreciated.

To send flowers to the family in memory of Arnold Landeck, please visit our flower store.