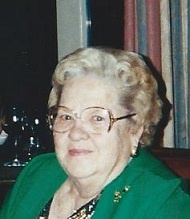 Arlene C. Marcukaitis, age 94, of Peotone, formerly of Monee, passed away on Wednesday, September 14, 2016 at Heritage Woods of Manteno.

She was born on December 12, 1921 in Kankakee County, Rockville Township, the daughter of the late Stanley and Mamie (Wilcox) Cabit. She married the late Adam J. Marcukaitis on February 22, 1940 in Manteno, IL. He died on February 7, 1998. Arlene was a homemaker and worked as an aide and activity coordinator at the Peotone Bensenville Home. She also served on the Board of Directors for the Eastern Will County Senior Services and was President of their advisory board. She also volunteered in the senior center’s re-sale shop. She enjoyed crafts and bird watching. Arlene was a member of the Christian Church of Manteno.

Visitation will be held at the Christian Church of Manteno, 401 E. Third St. Manteno, IL 60950, on Saturday, September 17 from 10:00 a.m.-11:00 a.m. Funeral services will be at the Christian Church of Manteno on Saturday, September 17 at 11:00 a.m., Pastor Bob Grove officiating. Cremation rites will be accorded following services. In lieu of flowers, memorials to the family’s wishes would be appreciated.

To send flowers to the family in memory of Arlene Marcukaitis, please visit our flower store.