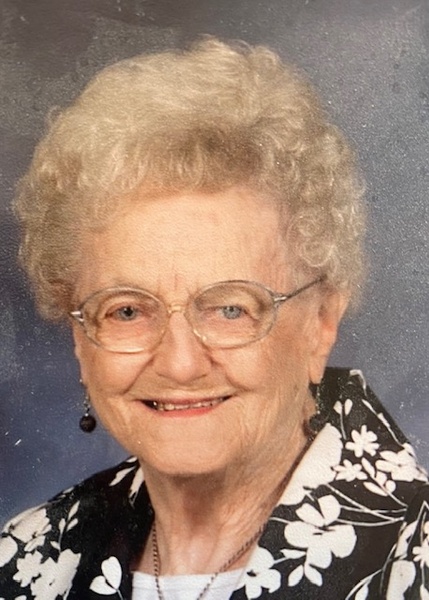 She was born on November 18, 1921 in Chicago, the daughter of John and Ida (Westenfeldt) Breiter.  She married Harold P. Koelling on December 27, 1947 at St. Peter’s United Church of Christ in Grant Park, IL.  He passed away on September 29, 2008. After attending college, Carol worked as a teacher at a one-room schoolhouse in Whitaker.  When she began having children, she stayed home to raise them and worked alongside her husband, Harold, on the family farm.  Later in life she worked for Teresa Foods in Peotone and also the Peotone Supermarket.  She was a member of Zion Lutheran Church of Grant Park and was a member of the church’s Lady’s Aide.

Visitation will be held at Fedde-Helfrich-Cross Funeral Home on Friday, December 31, from 10:00 a.m.-11:00 a.m. with funeral services being held at 11:00 a.m., David Alo officiating.  The wearing of a face-covering is required at the funeral home. Burial will take place at Zion Lutheran Cemetery in Grant Park.  Memorials in Carol’s name may be directed to Zion Lutheran Church or Uplifted Care Hospice.

To send flowers to the family in memory of Carol Koelling, please visit our flower store.